The Nuances of the Pneumothorax

There are three bedside tests we have to evaluate for pneumothorax: the physical exam, chest X-ray (CXR) and ultrasound (US).  The best one we have is undoubtedly US.  Learning the basics of this exam is fairly easy, with studies showing that it takes a small amount of didactics and hands-on, and has a very high retention rate. 1-3 That being said, there are a few nuances that you should know before basing your clinical management off of your US.

Oh, and if you need review on how to do the exam, check out this video:

There are 4 signs you can use to help you in the evaluation of a PTX:

Lung sliding is most useful when you see it. When lung sliding is seen, it has been reported to have a negative predictive value of 100% for ruling out pneumothorax at that interspace.4,5 When you don’t see lung sliding, it’s not quite as useful.  If you have a 32 year old triathlete that was in an MVC and has a seatbelt sign that has no lung sliding on one side, you can be fairly certain that lack of lung sliding is due to a PTX.  That being said, in most of the patients we will be seeing, the absence of lung sliding might not be good enough to use in clinical practice. The table below shows other conditions that can cause there to be a lack of lung sliding. 5,6

Where to scan to look for lung sliding.

Most of the current literature teaches that the evaluation for PTX should begin between the 2nd-4th ribs at the mid-clavicular line.7 If you have a hemodynamically unstable patient in whom you suspect a PTX as the cause of said hypotension, you can pretty much look anywhere in the anterior chest wall.  A PTX large enough to cause shock is very unlikely to not be identified there.8 However, if you want to increase your sensitivity, you might want to look a bit lower.  Let me explain: if you have a patient that isn’t in extremis, you should probably make sure to look at whatever part of the chest is most anterior.  In supine patients, you should start your evaluation around rib spaces 5-8.  One study found that in supine trauma patients, most pneumothoraces were seen in between rib spaces 5-8 bilaterally, not the commonly taught 2nd-4th IC spaces.7 Lichtenstein found that 38% of supine patients with PTX had the PTX localized in the lower half of the lung (the rest had it over the entire anterior wall, including the lower half).9 Make sure you look at all of the lungs, including laterally and superiorly, since you can only rule out a PTX in the rib space you see lung sliding.

[showhide type=”mmode” more_text=”If you need a review on how m-mode in PTX works, click here” less_text=”Click here to hide text on m-mode”] 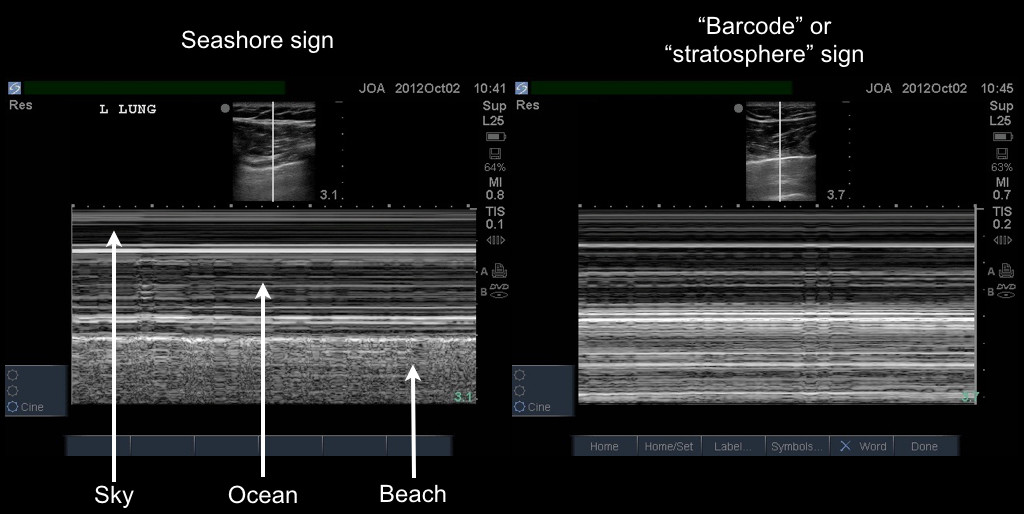 M-mode (or motion mode), is a technique that previously was taught to be useful in the evaluation of a PTX.  In fact, many publications that speak on the topic report that m-mode is a useful adjunct in the evaluation of a PTX. 5,10-13 (Update: 7/3/18).  Previously, I was pretty much a hater for using m-mode in the evaluation of a pneumothorax.  So much so, in fact, that I did a study on it.  I sent a quiz to 140 physicians and randomized them to get just the ultrasound clips or the ultrasound clips and the corresponding m-mode image of patients with and without a traumatic pneumothorax.  Turns out if you’re inexperienced (defined as having done <250 total ultrasounds in your life), the addition of m-mode increases your specificity and overall accuracy.  Take that information with a grain of salt, though.  This was essentially a convenience sample of residencies and people that I knew, and is only image interpretation, not image acquisition (which is a completely different skill set). Here’s the link.

[showhide type=”Lung_study” more_text=”If you need a review on the data from the study, click here” less_text=”Click here to hide text on Lung sliding study”] 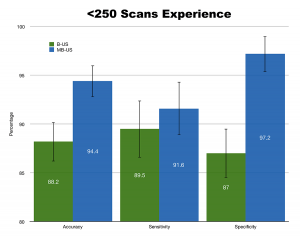 [showhide type=”Blines” more_text=”If you need a review on what b-lines are and how they’re generated, click here:” less_text=”Click here to hide text on b-lines”]

B-lines are hyperechoic (white) vertical artifacts that start at the pleural line, extend all the way to the bottom of the screen, and move with respiration (assuming that the pleural line is moving). Whereas it can be normal to see one or two in any particular rib space (especially in the lung bases if we see more than 3, it is considered to be pathologic of increased lung water. We know that they form when there is increased water content, but we’re not 100% sure exactly how they form. The theory is that when you have small amount of water surrounded by air, sound waves bounce around in that droplet of water. Each time they hit the border of the water molecule, they let out a sound that is picked up by the ultrasound transducer.  This happens so fast, and so frequently that it creates a vertical reverberation-type artifact that is translated by the ultrasound machine as a b-line.15

B-lines are thought to be generated from the visceral pleura, so it makes sense that visualization of B-lines rules out PTX. 16  For the most part that is true, but there are 2 things that you should keep in mind when using this clinically.  First, make sure they’re actual b-lines and not comet-tail artifacts.  B-lines extend all the way to the bottom of the screen and move with respiration.  Comet-tail artifacts look similar to b-lines except they don’t extend all the way to the bottom of the screen.  One study found that 84% of patients with a pneumothorax had comet-tail artifacts in the area of a pneumothorax.9 Second, although b-lines have been reported to be absent in all pneumothoraces, there is one bit of information that may contradict that.  There have been a few published articles that report b-lines being present in patients with pneumonectomies.  While no definitive explanations exist, there is a prevailing hypothesis that those patients with pneumonectomies have inflammation or other changes within and around the parietal pleura that mimic b-lines 17,18

The presence of what has been called the “lung pulse” also has been reported to help rule out a pneumothorax.  This is most helpful when a patient is apneic, or if for whatever reason they’re only ventilating one lung (like in a mainstem intubation). The theory is that if the visceral and parietal pleura are connected (i.e. when there isn’t a PTX) when the heart beats, it will transmit movement through the lung to the visceral parietal pleural interface (VPPI), showing a pulse at the level of the VPPI.22 Physiologically this makes perfect sense, but you also have to take this with a grain of salt, since there’s only one study that has evaluated the accuracy of this.  The study included 15 purposefully main-stemmed patients and to 30 appropriately intubated patients.6

When does ultrasound fail?

If you have a patient with subcutaneous emphysema, all bets are off. Air in the subcutaneous

There are 4 signs you should know to evaluate for a PTX, three rule it out, and one rules it in: