Pulmonary embolus is an important diagnosis to make, and of even more importance is to diagnose it with speed. Pulmonary embolus is the 3rd most common cause of death (behind stroke and MI)1, and two-thirds of the patients who will die from a PE will do so within the first hour of presentation.2 When most people think about ultrasound and PE, they think about right heart enlargement on an echo.  While this is an important component to evaluate, it is less sensitive and can be less specific than we think.  The absence of right heart enlargement on echo only tells us that the patient doesn’t have hemodynamic compromise from a PE at that point in time.  If the right heart is enlarged, it definitely could be a large PE, but right heart enlargement is in fact more commonly seen in COPD and right heart ischemia than it is seen in PE.  There are ways to differentiate between them, but I’ll be talking about how to do that in an upcoming post.  If you want to learn more about right heart enlargement in the meantime, check out the podcast I did on EMRES and a post I wrote for SONOSPOT.

What we’re going to talk about today is subpleural consolidations:

Subpleural consolidations are pleural-based hypoechoic (dark) fluid collections that can be either wedge shaped (most common), circular, or polygonal in nature and are a fairly specific sonographic finding for PE as long as there is no surrounding inflammatory changes (Inflammatory changes = b-lines = PNA). If you want to learn more about what to look for and how to do the exam, check out my 5minsono page here.

You can use either the phased array probe or the curvilinear probe.  Look all over the thorax, but make sure to pay special attention to the posterior lateral zones as that’s where you’re more likely to see the lesions.

There are few different criteria used throughout the literature to diagnose PE with thoracic ultrasound, but the most frequently used finding is the presence of subpleural consolidations: 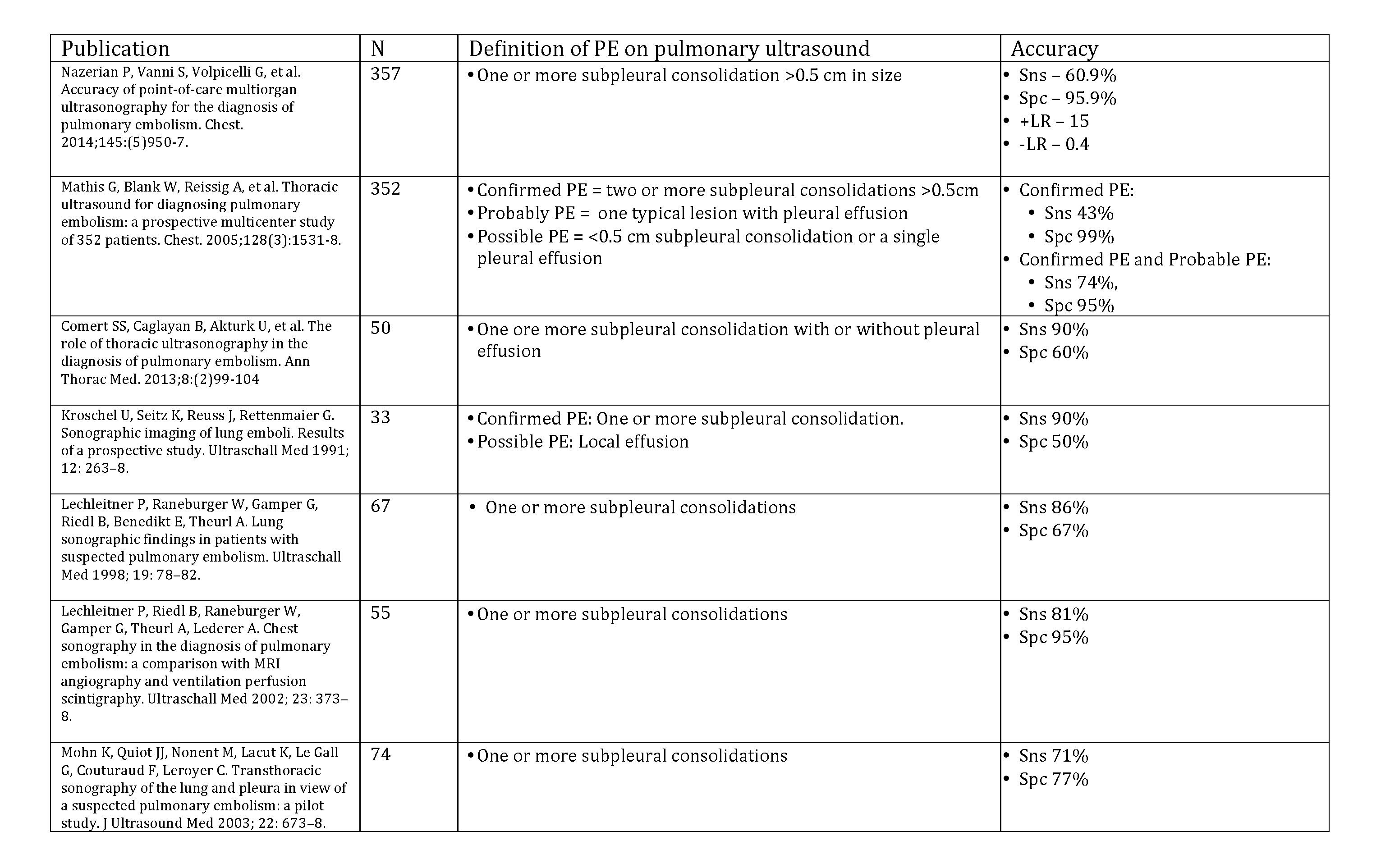 What causes these subpleural consolidations? There are a few theories:

Ischemia/Infarction/Necrosis3,4,5
The thought here is that a PE will cause diminished blood flow to the distal lung parenchyma, causing ischemia that leads to infarction and necrosis. The focal ischemic changes and/or hemorrhage will manifest by increased fluid content to a focal area just distal to the PE.

A few months ago, I had a great discussion on twitter with @DrAndrewDixson of @Radiopaedia after my 5minsono post on subpleural consolidations.  During our twitter conversation, Dr. Dixson bought up an interesting point (and that I had honestly completely forgotten about), which is that is that the majority of the blood supply to the lung parenchyma is not supplied by the pulmonary circulation, but rather is supplied by the bronchial circulation. What this means is that while subpleural consolidations due to ischemia are definitely seen in PE, they shouldn’t occur nearly as commonly as is reported in the ultrasound literature. When mentioned that important concept, I really didn’t have a good answer for him and had to do some research.  After a few days I came up with an answer:

According to these radiology CT studies, subpleural, wedge-shaped consolidations are, in fact, more likely to be present in patients with PE compared to those with other pathology, but they’re definitely not as prevalent as we see in the ultrasound literature. 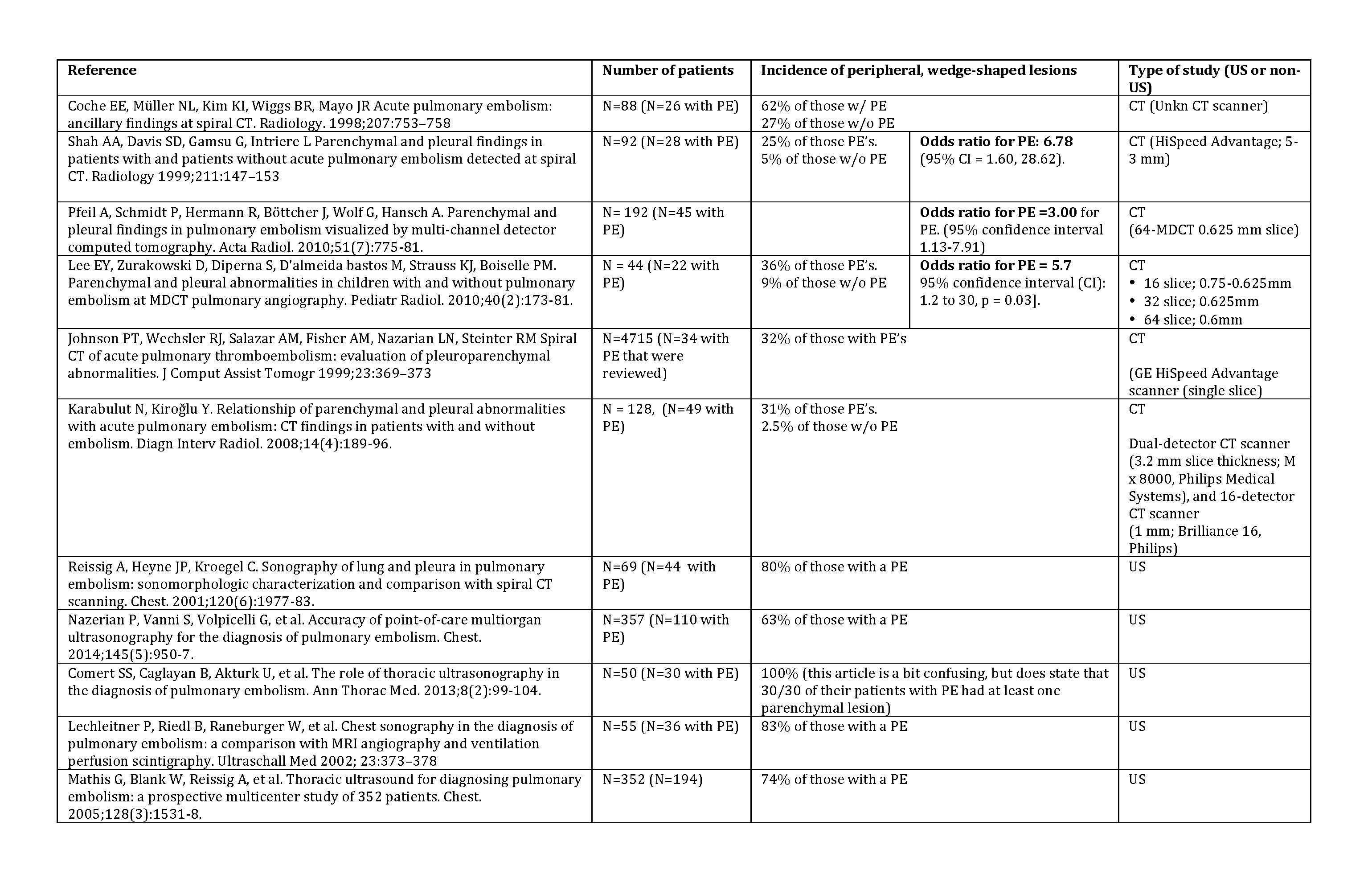 What about the bronchial vs pulmonary circulation?

The bronchial circulation does supply the vast majority of the pulmonary parenchyma, but it supplies the lung parenchyma up until you get to the terminal bronchioles, after which the lung is actually supplied by the pulmonary circulation. The theory that explains why you see sonographic subpleural consolidations is that emboli shower off smaller emboli, which then lodge distal to the terminal bronchioles. This can cause ischemia, which can lead to atelectasis and infarction. If the clot isn’t resorbed by the body or thrombolysed, it can lead to necrosis.

The sonographic examination of the lungs for pulmonary embolism is not perfect, but as far as bedside tests, it’s actually pretty good.  Much better than anything else we have (except for maybe a positive leg DVT ultrasound). So why is there such a discrepancy with the prevalence of subpleural consolidation in PE when you compare CT and ultrasound literature? I’m not too sure, but one  thought I had was the fact that PE is a changing, evolving disease, and the patients in the CT studies may have had their wedge shaped lesions resolve between presentation and when they got the CT (I only found one study that said anything about the time between their presentation and when they got the CT scan and it said that they got it “within 24 hours”).7

Like anything in medicine there is no silver bullet.  Ultrasound should be used as a tool in your quiver to save your dying patient, but next time you have a patient with suspected PE, throw the ultrasound probe on their chest and let me know what you see.