This patient is a 28 year old male who was brought to you by EMS after he was found lying unconscious in his apartment by his family. The only medical history known by EMS is the patient was recently admitted for severe pancreatitis and has an indwelling PICC line in his LUE. EMS found the patient to be pale, bradypnic with a GCS of 3, O2 sat 75%. EMS RSI’d the patient and placed him on PEEP 8, TV 10 mg/kg, FiO2 100%. The O2 sat was noted to decrease to the mid 50s immediately after intubation, and remained there. In the ED, the patient’s vitals are: BP 120/84 P 105 O2 sat 56% T 97.5F. The patient appears severely cyanotic, but has normal pulses and symmetric breath sounds. 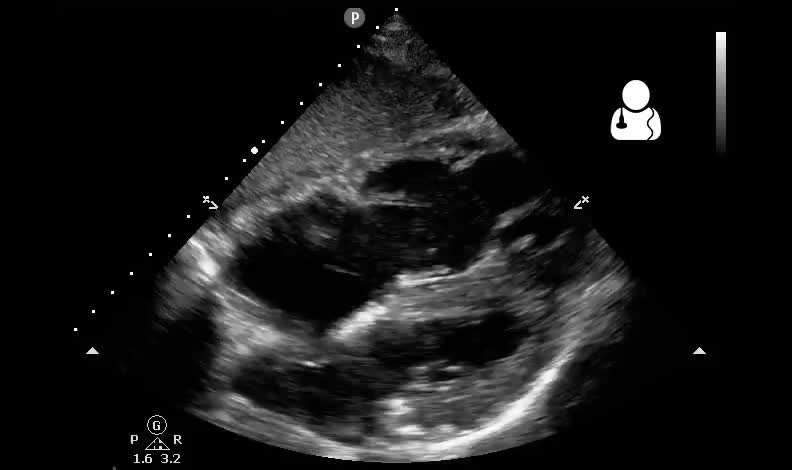 This bedside echocardiogram demonstrates a severely dilated RV with a McConnell’s sign (akenetic RV free wall with spared function at the apical septum). During the apical view, the patient’s peripheral IV was being flushed with normal saline, resulting in a serendipitous bubble study. It is apparent that there is a significant right to left shunt.

The patient’s presentation and echocardiogram prompted an emergent CTA of the chest that demonstrated several segmental pulmonary emboli. The degree of severe hypoxia would typically not be explained by this finding in isolation. It can also be stated that a PE resulting in such severe hypoxia would typically not result in this patient’s relatively normal hemodynamics.

Subsequent history was obtained on this patient: he had had multiple previous pulmonary emboli. This patient’s right to left shunt was the result of an unfortunate combination of acute on chronic pulmonary hypertension and an ASD. The acute PE pushed the patient’s pulmonary artery pressures (and subsequent RV&RA pressures) above those being generated on the left heart, so the shunt suddenly become worse.

There are several important points in the management of this patient: