Due to the transfer diagnosis of DVT and the patient reporting mild shortness of breath, a bedside ultrasound was performed to look for any evidence of right heart strain. Although no 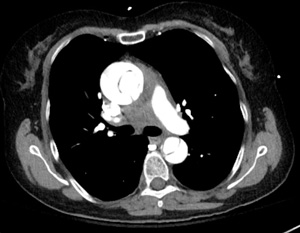 right heart strain was appreciated, it was noted that the patient had a dilated aortic root. This prompted further evaluation of the aorta, which uncovered an aortic intimal flap, confirming the diagnosis of an aortic dissection. CT surgery was called, and while they were arriving in the hospital, the patient’s blood pressure dropped to the 50’s systolic. Blood was given and the patients BP stabilized. CT scan confirmed the diagnosis, and the patient was taken to the OR, where he received an aortic graft and left the hospital some days later without major complication. 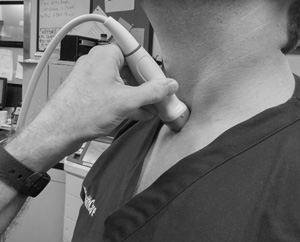