A 60-year old man with a history of COPD, CKD presented with dysphagia. He had been unable to eat for approximately 12 hours after a heavy meal. Review of systems also revealed that he has had several episodes of syncope, extreme dyspnea on exertion, and one episode facial and arm numbness. GI was consulted under the presumption of food impaction with a planned in-ED EGD. A review of the patient’s chart notes a normal ECHO performed 19 months prior. An astute EM resident decides to do a point of care cardiac ultrasound prior to elective intubation and finds the below images.

What does the clips show? What is the diagnosis? (Click the button for the answer!)

The images are most notable for severely reduced systolic function and impressive “smoke” or spontaneous echo contrast. The first image is an apical long axis view and the second is an apical 5 chamber view with emphasis on the left side of the heart. There is global reduction in excursion of the endocardium. Within the ventricle is swirling echogenic material which, despite the name “echo contrast,” is actually stagnant blood.
From the apical five chamber view an aortic outflow velocity time integral (AoVTI) is obtained, which demonstrates a value of 6.71cm (normal 18-24cm). 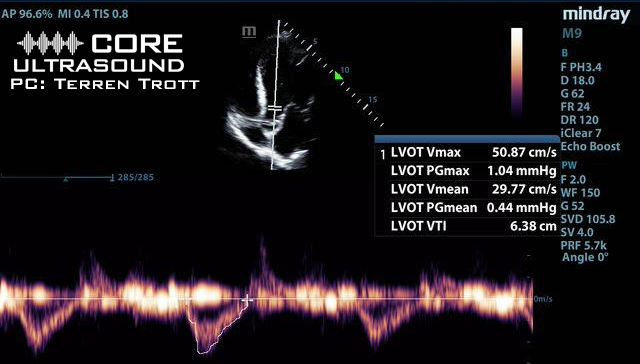 As a surrogate for cardiac output and stroke volume, the AoVTi is severely reduced, confirming the visual global estimate.
The last clip obtained (seen below) is a bedside bubble study via a subxiphoid view and agitated saline. The spontaneous echo contrast was so impressive, the providers wanted to confirm that the smoke was not in fact due to agitated fluids running through an IV.

Very clearly, no PFO agitated saline is seen in the left ventricle, ruling out a PFO.
The case concludes by deferring emergent endoscopy and admission to the cardiology service for further workup of new heart failure.