56 yo male presents with a decrease in their vision over the past 2-3 days.  Vision loss is described as a central loss of color vision (area appears gray).  No vision or color loss in the periphery is described.

On exam, his vital signs are are normal. You attempt to perform a funduscopic examination, but are unable to adequately visualize the retina.  A bedside ultrasound is subsequently performed and the following clips are obtained:

What do the clips show? What is the diagnosis? (Click the button for the answer!)

Bedside ultrasound does not demonstrate an obvious retinal or vitreous detachment.  However, there is a small area of edema identified in the region of the macula. This prompted further evaluation by an ophthathalmologist.  On their examination, they were able to visualize a large area of edema involving 80% of the macula.

The following image demonstrates an OCT of a central serous chorioretinopathy:

See also
Ultrasound of the Week 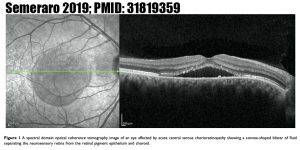